Baby took a long nap today so I thought I would see how far I could get with the scarf.

This is all about learning and first problem with the scarf project was that the fabric wasn’t wide enough. I had already noticed this when I was at the fabric store, so I had bought twice the amount and planned to sew two halves together. Time will tell if this was bad judgement on my side, or maybe my improvisation turn out okay.

Second thing I noticed today was that I apparently can’t cut in a nice straight line. I could blame it on the scissors, but I guess I just haven’t got the experience of cutting fabric yet. Also I probably shouldn’t have “cut corners” by doubling the fabric so I only had to cut once in stead of twice. Lesson learned: ‘Don’t cut corners when cutting fabric’.

Third probable mistake was that I thought I could get away with using the thread already sitting in the machine to sew the two halves together. I think I might get away with it, but am actually a bit disappointed in myself for not spooling the correct colour and threading the machine according to the fabric.

One thing I am proud of remembering is that I checked the thread tension on a scrap. And a good thing I did too, because it was way off. It actually took quite some tries before I got it right.

I’ve begun basting the two sides of the scarf together – this is how it looks so far: 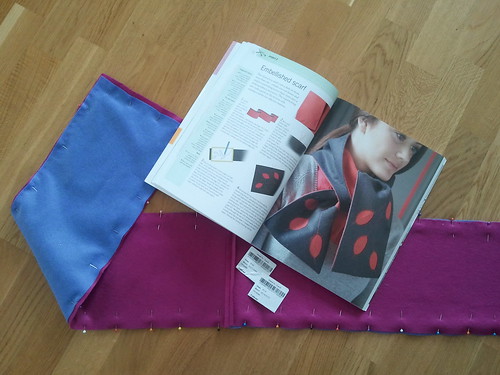 And a close-up (look at how off my cutting is, and my basting stitches could be neater). 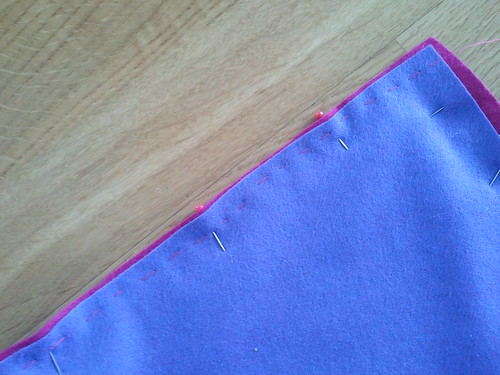